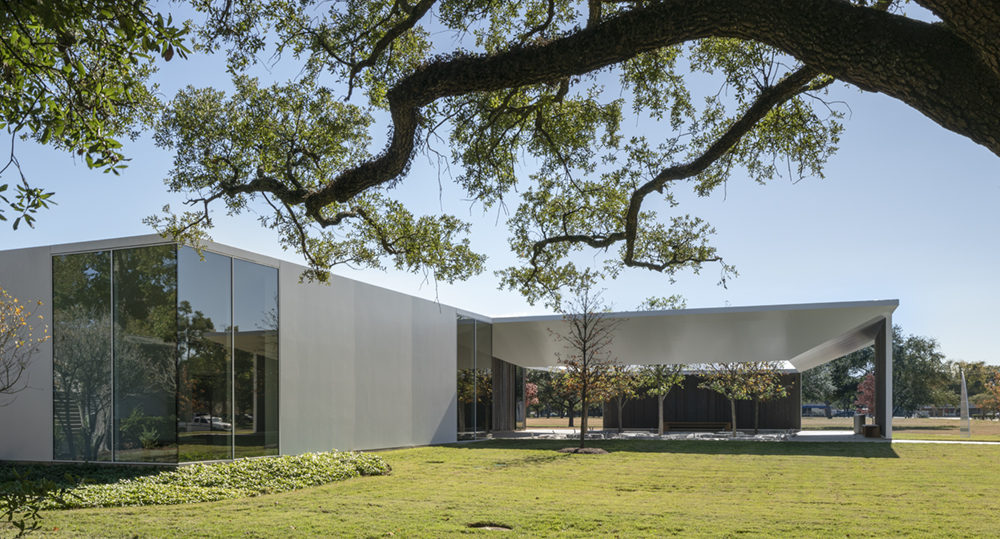 The Menil Drawing Institute (MDI) is sited within the 30 acre campus of The Menil Collection. Positioned in the geographic centre of the campus, the MDI is adjacent to the Cy Twombly Pavilion and nested among the historic bungalows that make up the fabric of this neighbourhood of art. The design of the MDI honours the legacy of intimacy and direct engagement with art that underlies the domestic and institutional character of the Menil Collection campus. Situated in a park-like setting, the new building assumes the scale of both a house and a museum, with a low-lying, elongated profile that blends with the architecture of the historic campus while signalling a new dimension for future growth.

The MDI is composed of a series of buildings and courtyards unified by a white steel plate roof that hovers over the landscape. The roof defines two entry courtyards to the east and west. A third courtyard within the building links public and private zones of the building and organises circulation between offices and scholar study areas. These courtyards belong to both the park and the building, as thresholds between outdoor and indoor spaces. Within the courtyards, the underlying folds of the roof plane embrace the tree canopies to create a shaded atmosphere around the building. Shedding light, the roof reflects the shadows of the trees and contrasts with the deep grey cedar planks that clad the building.

Based in Los Angeles, Johnston Marklee is an architecture practice founded in 1998 by principals Sharon Johnston and Mark Lee. It has been said that the pair is in some ways more closely associated with a group of well-travelled younger architects from around the world than with its home city, and they have often engaged in collaborative projects with other firms in Europe and South America. This monographic issue covers diverse projects by Johnston Marklee from 2005 to the present. It includes an interview with the architects and features notable works such as the Menil Drawing Institute and the Museum of Contemporary Art Chicago, plus a number of private residences.